i’ve always been such a fan of thai food. it’s comfort food. the flavors are so interesting! since there are so many good thai restaurants in DC, i don’t normally try to cook it, but this recipe jumped out at me. it’s super simple, the only real thai aspect of this recipe is the salad dressing.

this thai steak salad, from food & wine,  is a great week night meal. it’s hearty but healthy. the lettuce mixed with cilantro and basil add a really interesting twist that makes a big difference! don’t leave it out.

i used grassfed beef and all organic ingredients, making it even healthier! keep the dressing and use it later and with other proteins!

in a blender, combine 2 Tbsp. vegetable oil, lime juice, fish sauce, soy sauce, garlic, chile, ginger, and sugar. puree until well blended. season with salt & pepper (you won’t need much salt since there is soy sauce and fish sauce, so taste before seasoning).

light a grill or heat up a grill pan on the stove. brush the steak with vegetable oil and season with salt & pepper. grill over high heat until meat is charred on the outside and medium rare within, 5 minutes per side. transfer to a plate and let rest for 5 minutes.

meanwhile, in a large bowl, toss romaine with tomatoes, onion, cucumber, scallions, basil, and cilantro. add a few tablespoons of the dressing and toss. divide among plates. slice steak thinly across the grain and serve alongside salad. pour a teaspoon or two of dressing over the steak before serving. 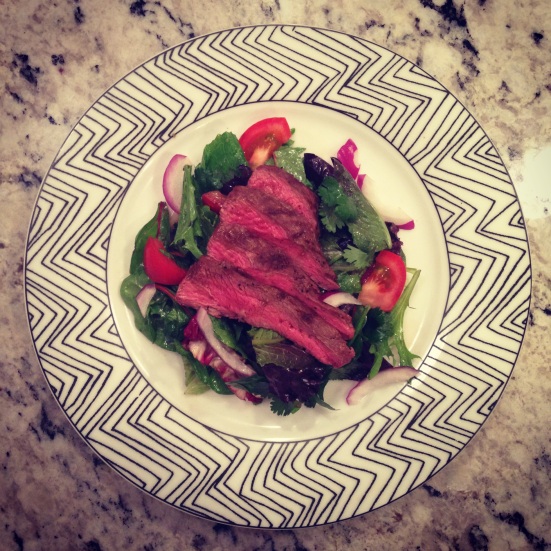